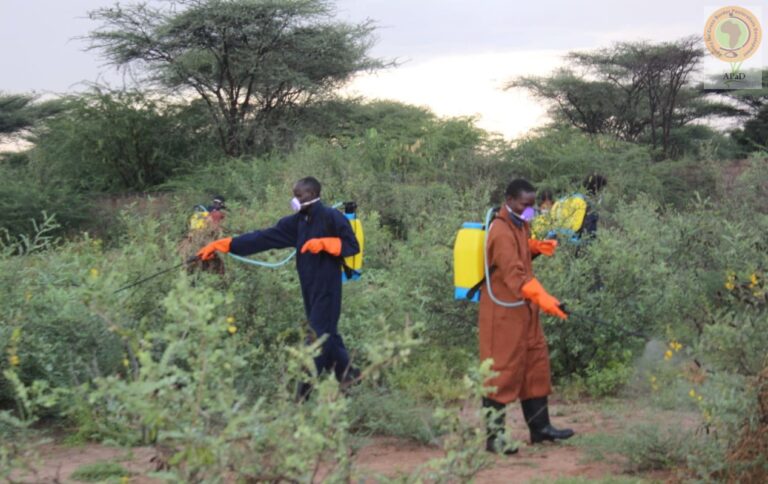 Turkana county has been the epicenter of desert locust control measures, with the highest number of hopper band sites reported. The swarms of locusts that came from Somalia through Mandera and EL wak on 28th December 2019 were first sighted in Turkana on 1st February 2020 in Lokwamusing, Turkana East.

The county has experienced invasion and two generations of the desert locusts with the first generation being in mid-March 2019 and second generation swarms having been seen in Turkana South, Turkana East, Turkana Central, Loima, and Turkana North. Ground and aerial surveillance and spray has been ongoing since 26th February, 2020.

Upon the onset of the desert locusts, several livelihoods were affected, with communities being on the receiving end of the challenges. There was hence need to support communities to recover their lost assets. Before commencing of the ground spraying activities, the desert locusts had invaded over 462,000 hectares, destroying crops and rangeland resources causing huge economic loses to agro-pastoralists/pastoralists leading to food and income insecurity to human population.

APaD through funding from Sustainable Agricultural Initiatives (SAII), and support from the Turkana County Government (TCG), more specifically from the Directorate of Agriculture, Administration leadership of Loima and the Agriculture Officers from Loima, was able to counter the spread of the locusts. Several meetings were held to ensure the area administration and the target community was aware of the project, and that they received the project well.

In collaboration with the Turkana county leadership, community barazas were held by the Sub-County Administrator for Loima, in order to create more awareness to the Loima community on the intended plans to carry out locust control intervention. The Area Administration lauded the efforts by APaD and SAII to collaborate in ensuring the Locusts are sprayed to reduce damages to the crops and the forests.

In the fight to mitigate the infestation of Locusts in Loima sub-county, 60 youths were identified by APaD to support in the ground spraying exercise of Locusts. Through this, the community would own the exercise with supervision from APaD and the County Government of Turkana. 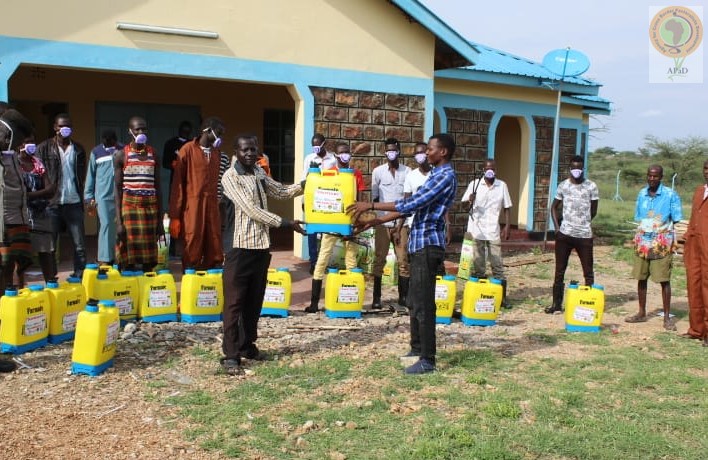 The recruited youths were drawn from several villages around Loima Sub-county giving consideration to gender, academic qualification, and people with special interest.

The 60 sets of Personal Protective Equipment (Overall, Masks, Gumboots, and gloves) and 60 Knapsack sprayers donated by SAII were handed over to the administrator for Lokiriama/Loreng’kipi ward in presence of the area chiefs. The ward administrator’s office would work as the control point for the Equipment.

Two trainings were carried out; one targeting the pastoralists community in the rural set-up and the other in the rural set-up where the group was doing fodder production. This was to ensure that communities understand better, the effects of locusts to the agroforestry like Acacia and Moringa trees.

In order to restore community livelihoods destroyed by the desert locusts, APaD would help the community build resilience with activities such as;

During this whole exercise, there are some challenges encountered and such included;

There is assured sustainability of the project as the training that was carried out to the youths will be well cascaded to the communities on better use of Moringa and the right time to do planting.

The PPEs handed to the administration will ensure that the project will be there to support the communities even when the donors have exit.